India Post Payment Bank conducted its IPPB PO Scale-I Main Exam on January 29, 2017. The overall exam was moderate to difficult. There were 5 sections as Quantitative Aptitude, Reasoning, English, GA and Computer. The level of exam was same as IBPS PO Mains 2016 Exam held in November 2016. So one can know that the exam was difficult. The English section was also carrying New pattern questions. Let us see the IPPB PO Scale-I Main Exam Analysis.

There was different time for all the sections in IPPB PO Scale-I Main Exam like in IBPS PO and SBI PO Main Exams.

The section was moderate to difficult containing 4 puzzles. The puzzles asked were – Floor, north-south with blood relation like that in IBPS PO, circular sitting and 1 more. From logical reasoning, passage conclusion was asked which remains difficult. The topics asked were: 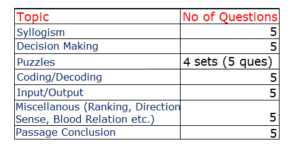 The section was moderate to difficult based on new pattern. It had sentence fillers as per new question pattern also asked in SBI PO and IBPS PO. Also there were questions from Add senetences topic. The pattern of questions is taken from CAT Exam Pattern. The topics asked were:

This time, Computer section is coming somewhat difficult  in exams and so it came in IPPB Assistant Main Exam this time. In depth knowledge was required to answer the questions asked.