We are providing you with a full length mock for the upcoming IBPS RRB PO Main 2021 Exam.

Directions (15-20): Study the following and answer the questions:

Vimal left Dehradun at 11:00 A.M. for Lakhimpur by bus. Lakhimpur is (P) km away from Dehradun. Speed of bus is (Q) km/hr. At 12:12 P.M. or after (2/15)th of P, bus stopped due to some technical issues. Vimal starts walking at 12 km/hr in the direction of Lakhimpur to eat something and he stopped at a Dhaba which is 6 kms away from the point where bus stopped. Vimal finished eating in 5 minutes. After eating, Vimal took the same bus which is moving at 125% of Q and he met his friend Sahil at 5:47 P.M. when he was just 118 km away from Lakhimpur at a road side shop. Both talked for 30 minutes and decided that they will have a race to find who reaches Lakhimpur first. Sahil is running at a speed of (R) km/hr, while Vimal is running with 133 1/3 % of his walking speed. Sahil reached Lakhimpur 88.5 minutes earlier than Vimal.After reaching Lakhimpur, Sahil and Vimal starts working on a task, Vimal alone can complete the task in 20 hours and Sahil alone takes 20% more time than Vimal to complete
the same task. With the help of Aman (who is 33 1/3 % less efficient than Vimal), they completed the same task together in (S) hours and they earned Rs. 21,600 as their wages on completion of the task. All three have invested their wages in a partnership business for two years and profit share of Vimal is (T) out of total profit of Rs. 27,900.

Directions (21-25): Solve the following equations and mark the correct option:

Directions(31-35): Given pie diagram shows the percentage distribution of number of registered voters in 5 tehsils. Study the diagram carefully and answer the following questions. 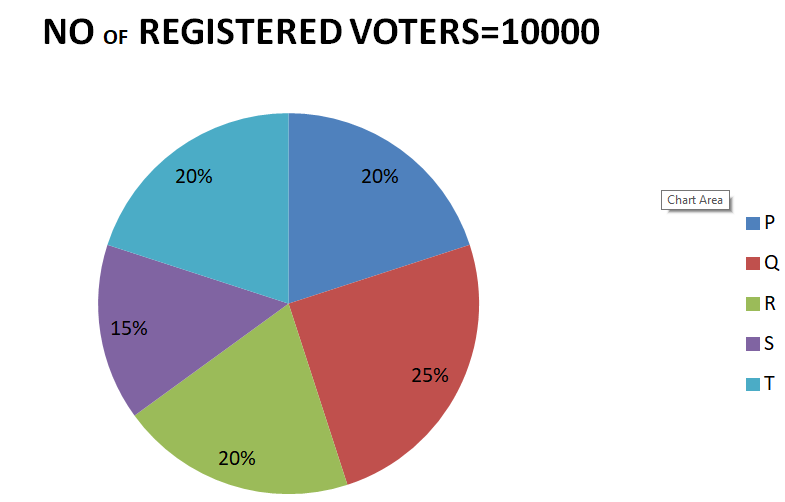 Directions(41-45): Study the information and answer the questions:

Directions(46-50): Study the following information and answer the question:

Eight friends are sitting in a straight line. All are facing same direction north, but not necessarily in same order. Each of them has a different age. Varsha sits one of the extreme ends of the row. Only two persons sit between the person who is 36 years old and Shivani. Priyanka is five years younger than the person sitting second to the left of him. Age of Riya is half the age of Tanushree. Varsha is twice as old as Priyanka. Only one person sits between Unnati and the person, who is 36 years old. More than one person sits between Riya and Weom. Neither Riya nor Weom is an immediate neighbour of Varsha. The person who is 24 years old sits immediate left of Riya. Priyanka is neither immediate neighbour of Weom nor Riya. Unnati is 10 years older than Priyanka. Age of Varsha is a multiple of 5. Weom does not sit at the any extreme end. Riya is more than 15 years old. Weom is 30 years old. Only two persons sit between Shivani and Varsha. The person who sits third to the left of Unnati is 24 years old. Shivani is eight years younger than Varsha.

Directions(56-60): Study the following information and answer the questions:

Directions(61-65): Study the following information and answer the questions:

Directions(66-68): In the following questions, the symbols @, $, *, # and δ used with the following meaning as illustrated below:

There are eight members Az, Bz, Cz, Dz, Ez, Fz, Gz and Hz of the same family. Fz, Dz and Ez are the only females’ members. Dz, who is married to Bz, is the second youngest member. Both Hz and Cz, are Ez’s maternal uncle. Az, who is the only child of Gz, has three kids. All the females belong to a different generation. Fz has only one child.

Directions(71-75): Study the following information and answer the questions given below:

Directions(76-80): In these questions, relationship between different elements is shown in the statements. The statements are followed by conclusions. Study the conclusions based on the given statements and select the appropriate answer:

Directions(81-85): Which of the following given at (A), (B), (C) and (D) can replace the words/phrases given in brackets in the sentence to make it grammatically and structurally correct? If the sentence is correct as it is, mark ‘No correction required’ as the answer.

Directions(86-89): In the question given below, three sentences have been given and in each of the sentences, four words have been highlighted. The spelling or the context of the highlighted words may or may not be correct. From the given alternatives, choose the one which indicates the incorrect word in each statement. If all the words in all the sentences are correct, choose option E i.e. ‘All are correct’ as your answer.

Directions(91-96): Read the given passage carefully and answer the questions that follow. Certain words are printed in bold to help you locate them while answering some of these.

The insurance business like most industries is cyclical. The insurance business has always been supply driven (demand stays relatively constant). When supply is up, prices tend to go down. So while individual insurers want and need rate increases, there is still substantial competition due to the large surplus. The more surplus a company has,
the more premiums they can write. This means lower premiums, relaxed underwriting and expanded coverage. This is referred to as a soft market.

Historically the industry can only endure a soft market for so long. Surplus suffers and prices start to go up, underwriting tightens and coverage is restricted. This is known as a hard market. So where in the cycle are we now? The answer is not clear. What we do know is that after 7 years of rate reductions, prices have stopped declining and on average have started increasing. After 5 solid years of returns (2003-2007), the industry’s results have deteriorated significantly.

Unfortunately, interest rates are at historic lows and investment returns have never been thinner. What makes the current cycle different from previous cycles, however, is that this cycle is predominantly driven by the income statement and not the balance sheet. Historically, “hard markets” suffered from both poor returns and depleted surplus. While surplus took a modest dip in 2011, it is still near an all-time high.

Directions(97-100): Four statements are given below at A, B, C and D. There may be some errors in the given statement(s). The incorrect statement is your answer.

Directions(101-108): In the following passage, there are blanks, each followed by a word given in bold. All these bold words are jumbled and do not necessarily fit in the blank placed before them. Find the appropriate fit for every blank and mark the answer accordingly. If the word placed after the blank is appropriate, mark option E i.e. “No change required” as the answer.
In India, few animals carry the kind of cultural (A)dating that elephants do. Human-elephant interaction boasts a rich history (B)symbolism back centuries. It is but natural that such a long association would also have encounters that do not end (C)happily. Nowhere is this more apparent than in Hassan in Karnataka, the state which is home to India’s largest population of Asian elephants. The Hassan region, however, has been (D)mobile by human-elephant conflicts for years with a number of these encounters resulting in fatalities. But, thanks to (E)vast conservation efforts and smart application of technology in recent months, Hassan could soon be at peace with its elephants. Hassan and nearby districts sit at the edges of India’s iconic Western Ghats, a UNESCO World Heritage Site and global biodiversity hotspot which accounts for about 60% of Karnataka’s forest area. A fertile landscape (F)confrontations fragmented forest patches, coffee plantations and paddy fields, Hassan offers a rich and (G)comprising topographical mosaic for elephants, a habitat generalist species known for travelling long distances. A (H)resilient majority of elephant-provoked human casualties in Hassan territories – just like in many other elephant corridors in southern India – have been accidental encounters when victims were caught unaware of the animal’s presence in close proximity. Most elephant (I)conducive occur during the 6 am to 10 am and 4 pm to 8 pm– when workers in coffee plantation and paddy fields are (J)beset. On an average, elephant-related incidents killed five people every year between 2010 and 2016 in districts surrounding Hassan.

Directions(109-110): In the given question, four words are printed in bold and are numbered 1, 2, 3 and 4. Of these, the position of two words may be incorrect and need to be exchanged to make the sentence correct. Find the two words which need to be exchanged. In case the given sentence is correct, your answer is (E), i.e, ‘No correction required’.

Directions(111-113): A sentence divided into three parts I, II and III is given. Determine the part(s) which requires correction and mark it as your answer.