Shortcut to solve syllogism by rules

Today we will discuss the basic methods that will help us in solving syllogisms in a fast and effective manner. The real rules will start from Day 3. But without the knowledge of the concepts that we will discuss today, you cannot move on to rules directly. So understand these concepts well.

Sample example of sentence in Syllogism: Some A are B

The main concept of Syllogism: FIRST AND LAST RULE

Our main aim in syllogism is to arrange the given proposition in such a way that the entities which are common in the multiple propositions always come together. Let’s understand it by an example.

But this may not be the case always. Some time in question, we may get propositions which are not arranged. We have to manually arrange them and then start solving the question. So we will use the FIST AND LAST RULE as our starting step in solving syllogism. 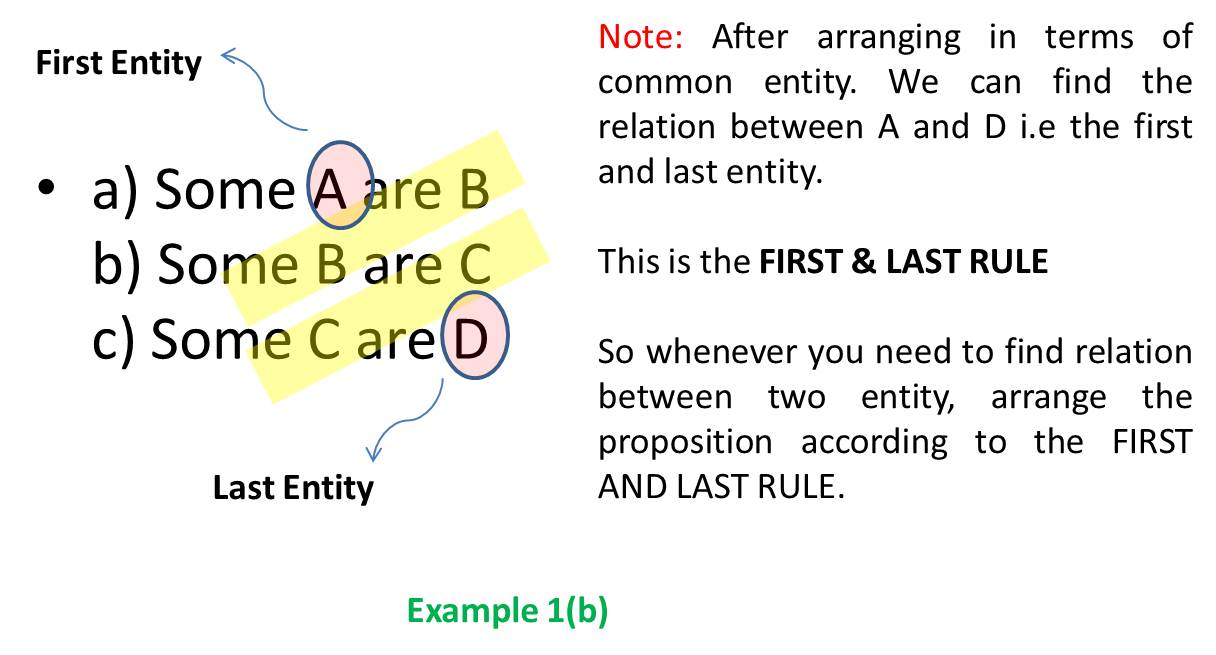 We must note that in Example 1, the propositions are already arranged in the desired manner. But in reality it may not be arranged. We have to arrange them by using certain methods. We will discuss two methods to achieve this.

(i) Rearrangement of Proposition

First identify the common terms. And arrange them accordingly. With non-common entity at FIRST and LAST and the common entity coming together as shown in example 1 (b) highlighted entity B,B and C,C comes together. Example: 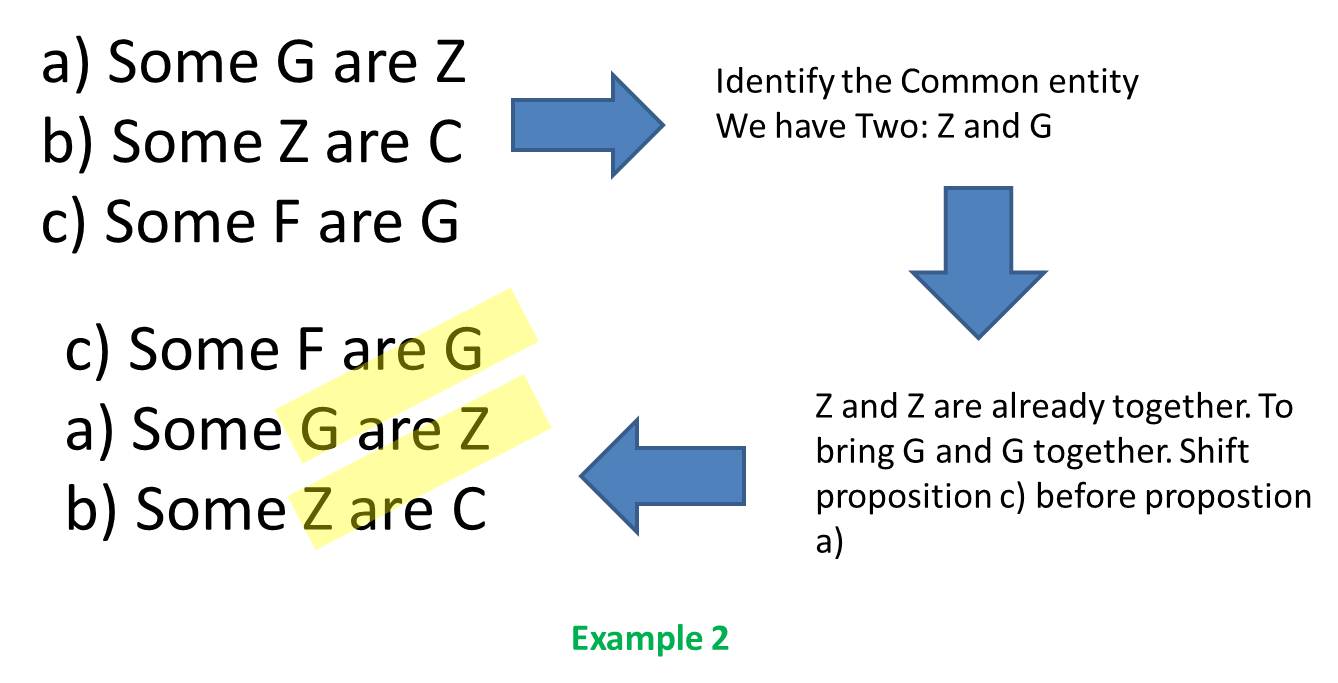 For concept of rearrangement to work, one of the common entity should be at the last of the proposition and the other should be starting.

Example: All A are B. Some B are C. Here the common entity is B. It comes at the end in proposition 1 while at the start in Proposition 2.
Example: All A are B. Some A are C. Here the common term is A. But in both the proposition A is at the beginning. So in such case we cannot use the concept of rearrangement. The method to solve such a case will be discussed later.

Exercise 1) Arrange these propositions in such a way that common entity comes together:

Solution: The common terms are tiger and lion. Arrangement is (b),(a),(c) i.e
Some elephant are tiger. No tiger is lion. All lion are monkey.

Exercise 2) Arrange these propositions in such a way that common entity comes together:

Ques) Which propositions are required to get a relation between blue and violet.
Answer: (c),(b),(d) [FIRST and LAST RULE] – The two entity between which relation is to be found out should come at beginning and at last.

Ques) Which propositions are required to get a relation between red and pink.
Answer: (a),(c),(b) [FIRST and LAST RULE

We will discuss the solution to this problem on Day 2.

Exercise for the Day

Q1) Arrange the given statement according to the FIRST & LAST rule to find a relation between CONE and RECTANGLE.
(a) All cones are cylinders.
(b) No square is a rectangle.
(c) All cylinders are squares.

View Answer
Correct Order is: (a)(c)(b)
Explanation: As we have to find relation between CONE and RECTANLGE, they should come at the beginning and at the end. So start with the statement that has CONE in the start. i.e (a).  Now the common term cylinder is in (a) and (c). So next proposition is (c) followed by (b).

Q2) Arrange the given statement according to the FIRST & LAST rule to find a relation between GRAPE and SWEET
(a) No orange is apple.
(b) All grapes are oranges.
(c) Some apples are sweet.

View Answer
(c) (b) (a)
Explanation: Start with the proposition which has either BOY or PRETTY in it. We have (c) and (a) . But choose (c) because it has boy in the starting. It will be easy. While (a) has PRETTY at the end. (c) follow by (b) [due to common term smart] followed by (a) [] due to common term girls

View Answer
(b) (c)
Explanation: Start with (b) it has BUSSES in starting. Common term rails is in (b) (c) SO we now have BUSSES and PLANE in starting and end. So FIRST LAST RULE is satisfied.

(a) No gold is silver.
(b) Some platinum is gold.
(c) Some silver are diamond.

We will discuss Reversal of Preposition on Day 2.